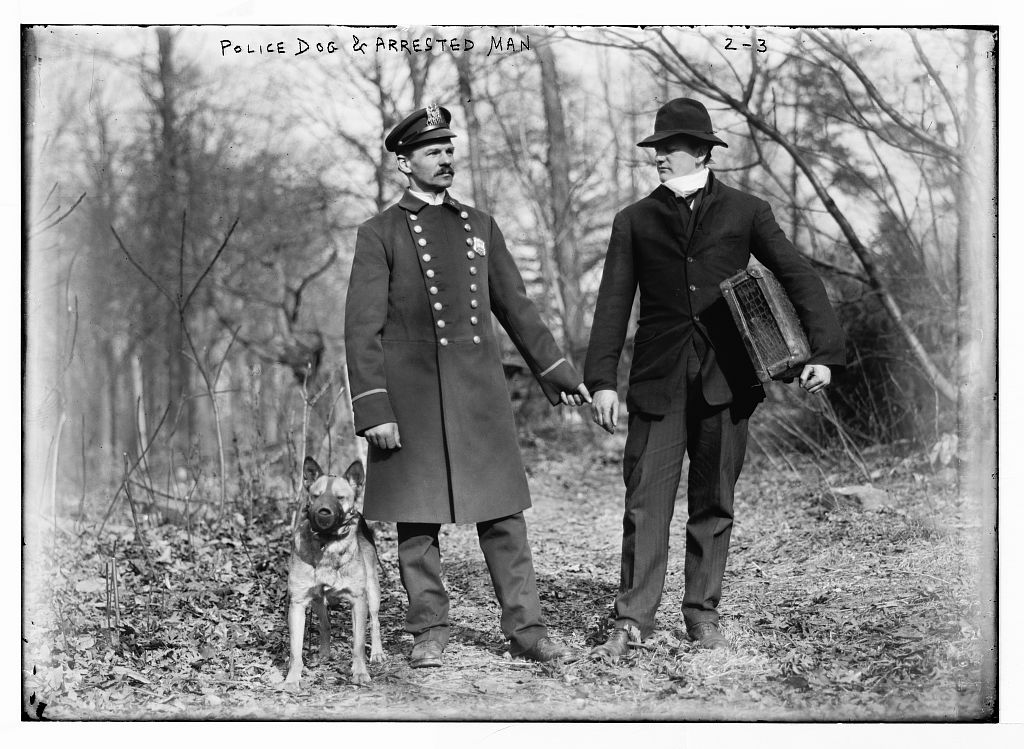 Nothing to see here, just an officer and his attack dog about to have a nice, consensual conversation with this suspect.

Basically, it describes something that the legal system accepts as true for convenience’s sake, despite the fact that it simply isn’t true in the rest of the world.  “Corporate Personhood” is a good example.  The legal system calls corporations “people” because it wants to treat them like people in some ways: to let them sue and be sued, to make them pay taxes, and, flabergastingly, to give them civil rights like free speech.  But they’re not people.  They don’t give live birth to their young, or eat toaster waffles, or experience existential anguish, or any of the things real people do.  It’s only Legal Fiction.

Fiction.  Slate’s Crime Blogger wrote a nice article about the myth of consensual police encounters, which I recommend, but just to briefly summarize the subject:  In the real world, “consenting” implies you know you have a choice not to allow something, but choose to allow it anyway. It’s supposed to be a voluntary decision.  But if two police officers approached you in an alley, and asked you to identify yourself and explain what you were doing, would you really feel like you have the option of saying, “nah,” and continuing on your way?  Probably not.

In the court of law, however, this situation is a typical “consensual encounter.”  (If it wasn’t called “consensual” the police would have to start with at least reasonable suspicion of criminal activity to ask you questions, which would mean throwing out a case where they didn’t have it at the outset.)  To justify calling this consensual, the courts basically ignore, or drastically underestimate, what linguists call “pragmatics.”  That is, the way words may have a certain semantic, literal meaning, but that meaning can change based on context.

For instance, if you’re eating dinner with some friends, and your buddy, who has a broken leg and is sweating profusely, says “hey, would you mind opening the window?” most people would agree the meaning of that sentence is “please open the window. I’m hot and it’s easier for you to do it than me.”  But in a world without pragmatics, this is a question you might answer by saying, “no, no I wouldn’t,” and continuing to eat your garlic bread.  That, after all, would be a reasonable answer to the question, semantically speaking.  [Note: ignoring pragmatics is also what your annoying grade school teacher was doing when you asked if you can go to the bathroom and he said “I don’t know, can you?”]

Basically, in Consensual Police Encounter Legal Fiction Land, if the sentence has a question mark at the end, the court will probably treat it like a question, even if it sounds an awful lot like a command, in context.  So, what do you do when you find yourself in Consensual Police Encounter Legal Fiction Land?  Slate wrote a follow-up piece to the consent article, discussing some different strategies. Basically, all are variations of “Just say no.”

This is the same advice I’ve heard from countless other defense attorneys, and I think it’s a reaction to the fact that we defense attorneys handle (and read about) myriad cases where the defendant consented to a search, or consented to an interview, which promptly led to the police finding that 20 pounds of heroin in the trunk.  We quite reasonably want to scream at them though the pages “Good Lord Almighty, what are you doing?  Just say no!”

And I agree that being abruptly non-cooperational is the best way to ultimately win in a subsequent legal argument based on “consent,” but I also think that this advice may also be ignorant of the situation’s pragmatic concerns.  Many, many police encounters do not end in court cases, and in these situations saying “None of your business!” when a policeman asks what you’re up to might not be the best tack, in my opinion.

Now possibly some policemen, when met with a confrontational citizen who refuses to cooperate, will think “Shucks, this fellow sure knows his legal rights. I better leave him alone!”  But I think that at least some officers—perhaps many officers—will instead think “Whoa, this guy is probably up to no good.  How can I keep him from leaving?” Or, more cynically, I suspect some officers might think, “This guy is an A-hole.  How can I make sure he doesn’t win this confrontation?”  I mean, if you were a police officer, what would you do?  And there are many ways the situation can get worse, even if it doesn’t ultimately result in a court case.  For instance, the “distinct odor of burnt marijuana” might come wafting in on the breeze.  That would give police cause to search and seize you, and that would not make for a pleasant encounter, even if nothing is there to find. 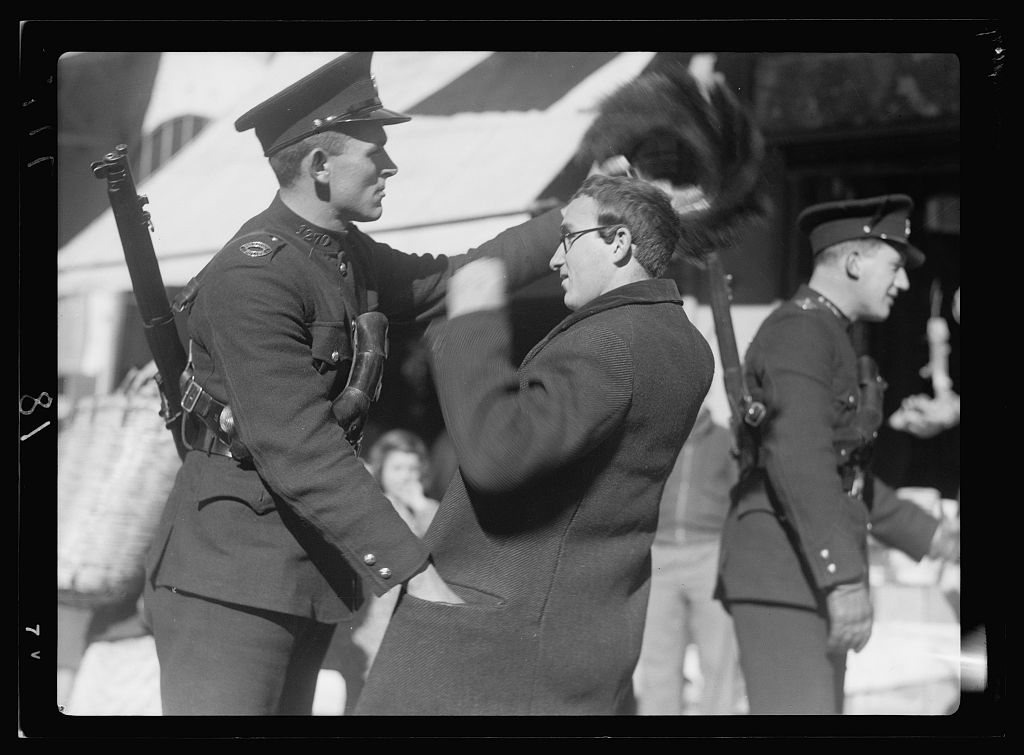 Look, they had consensual searches in 1920s England too!

Such being the case, you might consider treating an invitation to a “consensual” conversation or search like you would treat an invitation to dinner from an acquaintance you don’t really like, but don’t want to offend.  “I’m sorry, I’m really tired right now, and I just want to get home,” or “no, I can’t talk tonight, sorry. I’m in a hurry.”  This sort of response could go two different ways: it could make the officer think you are flexible on the matter of a consent, and continue to press you, in which case you should get more and more firm in your refusal.  Or it could make the officer think, “Oh well, I’ve got other things to do,” and leave you alone.  That is probably the best ending to this situation.

Just to be clear, there are three possible ways to handle the “consensual police encounter,” depending on your situation:

1) If you are legitimately worried that you might end up in court (for instance, you are breaking the law or you think it’s possible that it will look like you’re breaking the law), your ultimate goal should be winning that court case. In this situation, it’s best to be perfectly clear (and as rude as necessary) by saying “No!  Absolutely not.  I do not give wish to answer any questions.  I want to leave now.”  Then you walk away (or at least see how far you get).

2) If you are comfortably sure that you’re not breaking the law, and your goal is just to end the situation as quickly and easily as possible, you might think about the slightly more ambiguous, but more polite sort of refusal I’ve discussed above.  The worst thing that might happen is that you have to get “serious” with your refusal if you’re pressed on it.  And then you’re just back in situation #1.

3) And there is, of course, one other possible situation, and that is when you’re not breaking the law, and you’re certain that you’re not a suspect, and the police just want some help.  (For instance, someone runs by you carrying a bloody garbage bag with a human leg sticking out of it, and the police come around the corner and ask “where did he go?”)  In that case, you might just answer.